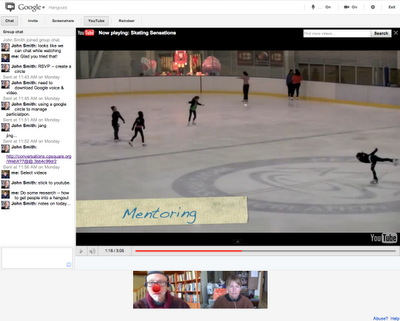 The Teaching and Learning Institute at Selkirk College has put together another event that will be live streamed and you're all invited!

What: Student Panel
Topic: How I/We Like to Learn
Where: Live streamed here: http://tiny.cc/3z9xa
When: January 19, 2012 (Pacific time zone)

MicroSCoPE: A closer look at what's happening in SCoPE


Use of Video in Education
January 11-24, 2012
Facilitator: Amy Severson
"As video gets easier to record and publish, it's valuable to step back and ask ourselves a few questions." What are your questions? How have you used video in your teaching? We've already started so come on in!

Open Content Licensing for Educators
January 23-27, 2012
A special invitation is extended by the OER Foundation to this free, open, online workshop designed for educators and students who want to learn more about open education resources, copyright, and creative commons licenses.

Demystifying the Student Perspective Part 2
January 25-28, 2012
Facilitators: Hilda Anggraeni and Diana Chan
This series is organized by students, for faculty. During Part 2 we will focus on the online environment. A 2-day asynchronous discussion will be followed by an interactive web conference, and a 1-day wrap-up discussion.

Quarterly Field Trips
January 23, 20:00 UTC
Our next field trip is an exploration of Communities of Practice that were "found" and observed from the outside and documented by Pepperdine graduate students -- organized in collaboration with CPSquare, the community of practice on communities of practice.

February Activities
Writing an e-book about e-books for fun and no profit
February 1-14, 2012
Facilitators: Richard Schwier and Scott Leslie

New Groups
Shared Services: Adobe Connect is a group of British Columbia educational practitioners using Adobe Connect in teaching and learning who are interested in sharing and improving practices.

About SCoPE
SCoPE brings together individuals who share an interest in educational research and practice, and offers opportunities for dialogue across disciplines, geographical borders, professions, levels of expertise, and education sectors. Our activities are facilitated by volunteers in the community, and membership is free and open to everyone.

SCoPE members receive email updates automatically. If you prefer to read MicroSCoPE on the web or via RSS, login and manage your subscription here. Professional learning events, resources, and member highlights are captured via Scoop.it.

We welcome requests to host or promote professional development activities and projects related to teaching and learning. SCoPE is supported by BCcampus. Contact: Sylvia Currie (scurrie@bccampus.ca)
Please spread the word about SCoPE!
at January 12, 2012 1 comment:

It was such a refreshing change to see this email signature from Phil O'Hara, Dalhousie University:


The information in this e-mail is NOT privileged or confidential. This information is intended for your use and any other distribution, copying or disclosure is strongly encouraged. Thank you.


This communication is privileged and contains confidential information intended only for the person(s) to whom it is addressed. Any unauthorized disclosure, copying, other distribution of this communication or taking any action on its contents is strictly prohibited. If you have received this message in error, please notify us immediately and delete this message without reading, copying or forwarding it to anyone.

This communication is intended for the use of the recipient to whom it is addressed, and may contain confidential, personal, and or privileged information. Please contact us immediately if you are not the intended recipient of this communication, and do not copy, distribute, or take action relying on it. Any communications received in error, or subsequent reply, should be deleted or destroyed.

Please consider the environment before printing this email. This e-mail may contain confidential or privileged information. If you are not the intended recipient, please notify the sender immediately. Any review, dissemination, copying, printing or other use of this email by persons or entities other than the addressee is prohibited, unless permission is granted by the sender. If you have received this email in error, please contact the sender immediately and delete the material from any computer.

I actually have a bigger collection of signatures that I've saved over the past year or so. But you get the idea!

I've noticed signatures from different people/organizations that have identical wording. Are they plagiarized? ;-)

I get a kick out of reading these. I'm curious about WHY people use email signatures that reveal such paranoia about how others might use those words in the message.

Do you add an email signature to your correspondence. Why? Is it a requirement of the organization you work for? Are you really concerned that someone will forward your email to others?

Have you noticed that nobody pays attention to these disclaimers? I've received hundreds of cc'd and forwarded messages containing information clearly stating that I should never have received them!