This quick interview is part of a new Educational Technology Users Group series to showcase members of the community. I am interviewing Janine Hirtz from University of British Columbia Okanagan.


About the process
The interview was done using Skype, along with an inexpensive application Call Recorder. I uploaded the .mov file that was generated from Call Recorder to Blip.tv but only the audio for Janine was working. So I imported the same file into iMovie, and while I was at it did one small edit where I got lost in the excitement and forgot how to speak! Somewhere along that process the audio got fixed because the exported version that I again uploaded to blip.tv works fine.

Technical overhead is always one of my biggest challenges. I admire people who can push buttons, talk, listen, adjust volume, move things around on their desktop, all while ignoring ringing phones and other distractions. If you want to see the pros in action participate in any online session with Paul Stacey, Nancy White, and Jonathan Finkelstein, to name a few. What I realized after hanging up is that there were some really big parts of Janine's story that we didn't get to. If I had been able to completely focus on what she was saying, I could have prompted more. Thankfully there are many other ways you can learn more about Janine!

My messy office in the background leaps out at me in this video. Why didn't I take the advice of Jesai Jayhmes, who taught us so much about backgrounds and lighting during the Humanizing the Online Experience series (part 1 and part 2) at SCoPE? I should have also revisited Janet Salmon's seminar at the time of the release of her book Online Interviews in Real Time, which is sitting right here on my bookshelf!

Tannis Morgan and Karen Belfer got the ball rolling for this event in 2010, and it just keeps on rolling!  Note that this year the event will be live streamed.

Do you teach online or are interested in online teaching? You might want to consider attending the free Online Course Showcase event happening at the Justice Institute of British Columbia (JIBC) on Nov 30, 2011.

The online course showcasing event is co-hosted by JIBC and Vancouver Community College and sponsored by the Metro Vancouver Educational Developers Network, with support from BCcampus. The purpose of the event is to bring together post-secondary institutions in the lower mainland to showcase their “best” online courses. This year’s showcase focuses on design decisions that are made because of the particular needs of students in the following categories:
1.  Accessibility
2.  Mobile learning
3.  Online courses in post-secondary institutions, and beyond.

We will also have a student panel this year!

How to Register:
This year you can register attend in person or via web streaming. You must register for either by November 24, 2011.  Registration at: http://onlinecourseshowcase.wordpress.com/event-registration/

Behind the Scenes of an Open Event

This week I participated in a debate organized by the Selkirk College Teaching and Learning Institute.: Is the internet making you smarter? An open invitation was extended to all by Theresa Southam, coordinator for the Institute. Being new to social media combined with her very part-time position at the college, Theresa requested a little help with event promotion and engagement. She is interested in opening up more events both in an effort to engage faculty and staff across the geographically distributed Selkirk campuses, but also to invite others beyond the walls of the college.

I'm so glad to see more of these open opportunities around the province! I thought I would share the experience and perhaps those institutions that would like to be more open in their professional learning activities will see some elements of what they will or will not do for their own events.

The Selkirk Tech team took care of the live streaming, which I understand was a first for them. They did a great job, and used Ustream which conveniently captures a recording. The number of online participants went up and down but I think the average was around 18. Some high school students were participating, including a debate team. How great is that!

The day before the event I received a couple really fun posters as PDF files via email which I posted on my own blog. In hindsight I should have also uploaded these posters to Slideshare as a way to help spread the word, and also Facebook. Ideally, these posters would have been embedded on the Selkirk website. Information about the event was also sent out via the BCcampus blog, @bccampus, and added to the MicroSCoPE Scoop.it page.

I pointed people to the Teaching and Learning Institute site, but noticed it was missing information about time zones. When I promote events through the SCoPE community I'm reaching out to educators around the world so I created an event on Time and Date. Also, our British Columbia post-secondary institutions span two time zones so I always like to answer that question before I'm asked.

The Selkirk Teaching and Learning twitter account, @FrankenSmarter, was to be used for the debate. I suggested using a hashtag #FrankenSmarter as a way to collect tweets into one place. Listening to the debate recording I realize that the Selkirk folks thought I would be tweeting from the @FrankenSmarter account. Oh well! Lesson learned is that I should do a better job of explaining what I'm up to!

I set up a #FrankenSmarter archive using a local Twapper Keeper install on our BCcampus Sandbox but I don't think it worked. That sandbox is a fun place to play but the tools there are not meant for production. In any case, anybody out there planning an event, make sure you create an archive for the hashtag because those tweets don't stick around for long. Twapper Keeper seems to be the most popular way to do this, and it also feeds into other nifty tools to display tweets, such as Summarizr.

Aside from a handful of retweets when promoting the event... 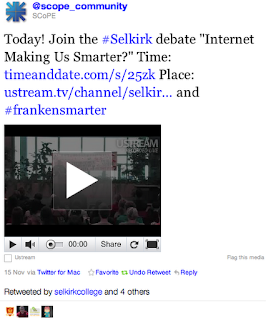 and a response from @mctoonish articulating her view on multi-tasking...

I mostly filled up the twitter stream all by myself. :-)

I was careful not to bombard my twitter followers with too much during the hour, and obviously it would have been a better experience with more interaction, but such is the nature of twitter -- just get it out there! The Ustream chat wasn't functioning for me but I see from the recording that "Selkirk Registrar"was there...alone. Actually, during Ustreamed events the chat backchannel can be a very valuable tool; it has little technical overhead, and not being limited to 140 characters can be liberating! For anyone planning to use Ustream for more than one-off occasions, the premium account is the way to go to avoid ads during the broadcast.

All in all this approach to opening up events does not involve a huge investment in time and dollars. The facilitator/ MC might acknowledge the virtual participants, but is not expected to engage them beyond that. The debate format is ideal for a live streamed event because the focus is on the people on the stage and holding the microphones. This means the camera can stay put and there is no requirement to repeat questions and comments from the audience, or to run around the room with portable microphones.

A challenge for me was that I didn't catch the names of the debaters during the live session, and I couldn't find that information online. But apart from feeling a little removed from the details of, and people involved in, the event, it was very entertaining! It was a fun way to spend an hour. We even got a  nice thank-you from the Selkirk Prez.

Is the Internet Making Us Smarter?

Heck YES or Heck NO? Join the debate at Selkirk College!

Brought to you by the Selkirk College Teaching and Learning Centre. 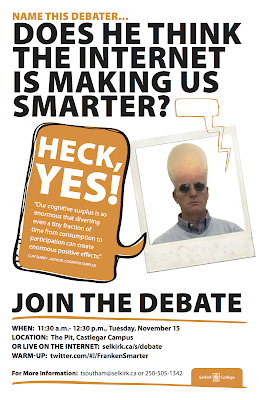 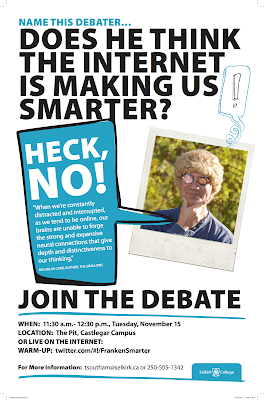