We're coming to the end of the final week of the Guiding the E-Researcher seminar at SCoPE. The discussion is facilitated by Janet Salmons, author of the book Online Interviews in Real Time. It's been a fascinating discussion, mostly focused on conducting online synchronous interviews, but also more broadly on scholarly research in general. And it's has gone far beyond the idea of trying to replicate face-to-face interviews in an online environment.

Earlier this week we explored the use of multi-channel meeting spaces for online interviews using Elluminate. The recording of that session is available, as well as an audio only (MP3) version.

January 29, 2010 we'll be exploring Vidyo, an example of using desktop videoconferencing for onine interviews. Martin Harvey and Joshua Sherman from Coroware have been fantastic in helping to organize this session. A couple weeks ago we met up to try out Vidyo and to talk about the upcoming session. Martin beamed in from Niagara-on-the-Lake in Ontario (top), Janet from Boulder, Colorado (bottom middle), Joshua from Seattle, Washington (left), and I was in Lac Le Jeune, British Columbia (bottom right). 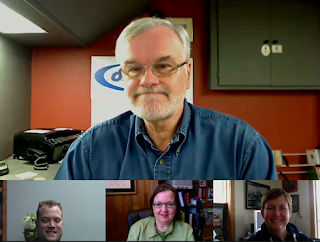 During our trial run there were no technical issues, and the quality of the video and audio was amazing. Some issues may arise during our sessions tomorrow because Vidyo isn't intended for a large groups, but we're giving it a whirl! You're welcome to join us! (details here) To ensure we keep the communication channels open, we have set up an e-research text chat using BackNoise.
at January 28, 2010